Laura Schewel, someone who has been a personal inspiration to me, and who has been an amazing friend, has been named by MIT Technology Review as one of the world’s top 35 innovators under 35. She’s accepting her award at this year’s emTech, and I wanted to write here a short letter about the importance of her work, and what it means to me. 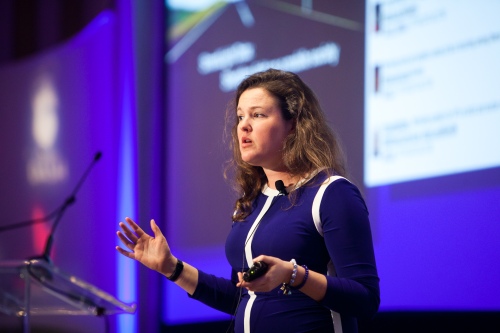 Cites have been called the defining technology of civilization.† They are emergent phenomenon, work admirably at an extraordinary range of scales and complexities, incubate our most audacious dreams, are more resilient and long lived than even the hardiest identified organisms, and are on balance, the most scalable, efficient, general purpose mode of human organization that we’ve got. Cities are green, and cities are our future.

Yet for all of their merits, the dynamics of cities remain much a mystery. And traffic, among the most dynamic of  dynamics, is among the most consequential.

Access defines neighborhoods and the life of commercial enterprises. And at the city level, we give up a spectacular amount of our cities to pavement and automobile traffic (estimates vary between 30 – 40% of our cities and 50 – 60% of the world’s built surface). The road network layouts of cities are incredibly durable, withstanding fires, earthquakes, floods, the replacement of the entire building stock, even the fall of a civilization.‡ ⩈

The questions drive a multi-billion dollar intelligence industry; people are paying for answers, and customers are sophisticated. Fundamentally, however, the field is in a pre-Galilean state of knowledge — flows, impressions, anecdotes, and theories abound, but this there hasn’t been enough data, at a granular enough level, to create and verify models that provide meaningful efforts to specific questions. Guesswork, and linear projection predominate. We can do better.

Laura Schewel is a principled revolutionary. Her extreme bias is to uncover hidden efficiencies in planetary scale infrastructure; work that is among the most pragmatic and impactful that I could imagine. And so, her and her StreetLight Data team combine precise and granular data, gathered by GPS with fleet vehicle and opt-in insurance partnerships, with scientific rigor, world class modeling and simulation, high octane data visualization and analysis, and deep insight in systems thinking and dynamics. They use these tools to provide real answers to specific questions for specific projects for governments, retailers, real estate developers, car dealerships, and economists. Moreover, they provide the tools, perspective, and cognitive framework for each of these customers to play with, learn from, and get a feel for the dynamics of each of their respective systems. StreetLight Data is bringing excellence in systems thinking to our most important organizations.

My cofounder and I have at this point met a large fraction of the strikingly competent beings that comprise the technology elite. Struck by the discrepancy between the ability of startup companies and governments to act, we asked ourselves, who among our friends could we imagine as president, leading our government to ascendance, success and efficiency?

We thought for just a second, and then at once said, “Laura Schewel.”

5 Comments to “A Principled Revolutionary”