Where laughter becomes more hilarious than whatever half-forgotten thing preceded it.

The Cure for the Common Cold

Once upon a time in Northern Mexico, my mother was sick. She had come down with a cold. Sitting on her porch, an old, tiny Mexican man walked up to her and said, “Beautiful lady, why are you looking so sad?”

“I have a cold!” she said. “I am tired and chilled. I feel like nothing.” Hearing that, he took a small flask from his jacket. “Take a swill of this. You will feel better.” It burnt on the way down. “Tequila perhaps,” she thought, “if it is, it is the best I have ever tasted.”

She said nothing. With a smile, the man shifted his hat, turned his body, and walked away.

The next day, he visited my mother, sitting on the same porch. “Are you feeling better?” he asked, reaching for his flask. “Maybe a little,” replied my mother, quaffing the fiery liquid with uncertain haste. “Good,” he said. And with that, he pulled the collar of his jacket taught, smiled, and walked away.

In a blur the days passed. The old man visited the next morning, and the morning after that, and on and on for a week. Finally, he asked, “Are you feeling better?”

“I am!” she said. “Good,” he replied. He shouldered his bag and turned to go.

“Wait!” she faintly cried, “Won’t you let me sip once more of your medicine?”

“More tequila?” the man said concernedly, furrowing his brow. He waved his hands in circles towards her. “There is no need. You are cured.” And with that, he gave a smile and a wink, he turned, and walked away.

alt. he-is-en-thought, as in, he is in thought, don’t disturb him… (thanks to Marc Chung @heisenthought)

1. A thought subject to mental collapse triggered by interruption.

2. A mental event or sequence characterized by coexistence of loosely related, sometimes contradictory, sets of knowledge or tasks. Highly dispersed in knowledge space, though it may support well defined momentum. Apt to tunnel through imposing technical or energetic barriers.

Collapse triggered upon the observation of the state of current knowledge by a third party. During the beginning states of observation, keen thinkers engage in a mad scramble to save mindstate, which may at some later time be partially reloaded. Status reports are heisenthought’s natural predator. Occasionally, members of a team will spontaneously ‘go dark’, in an attempt to think through some difficult problem — sometimes the only strategy which will work to extricate oneself from local extrema in solutionspace.1,2 Caution should be taken when observing said people, as doing so will both collapse their progress into a single, likely suboptimal path, and be likely misinterpreted as disloyalty, hubris or laziness, since they have disengaged from discussion with no apparent progress.

3. A mental event or sequence characterized by firmly specified and demarcated generating bodies of knowledge, and ill discernible forward movement. Induced by overspecification of problem, method, or solution. Collapse upon observation of current direction of progress by a third party. “‘Are we moving forward on this?’ ‘The heisenthought collapsed; we’re moving, just not in the right direction…'”

5. A tongue-in-cheek term invented to cast off workplace ‘pings’, ‘check-ins’, ‘status-reports’ and ‘how’s it goings?’.

[1] – For example, read the interviews with Max Levchin in chapter 1 and Blake Ross in chapter 29 of Jessica Livingston’s Founders at Work.

Max discusses how he went dark for a year, and came up with the something that really mattered — a way to fight fraud.

We had this merger with a company called X.com. It was a bit of a tough merger because the companies were really competitive—we were two large competitors in the same market. For a while, Peter took some time off. The guy who ran X.com became the CEO, and I remained the CTO. He was really into Windows, and I was really into Unix. So there was this bad blood for a while between the engineering teams. He was convinced that Windows was where it’s at and that we have to switch to Windows, but the platform that we used was, I thought, built really well and I wanted to keep it. I wanted to stay on Unix. […]

I had this intern that I hired before the merger, and we thought, “We built all these cool Unix projects, but it’s kind of pointless now because they are going to scrap the platform. We might as well do something else.” So he and I decided we were going to find ourselves fun projects. […]

It was me acting out, but it was kind of a low time for me because I was not happy with the way we were going. Part of having a CEO is that you can respectfully disagree, but you can resign if you don’t like it that much. But then eventually I became interested in the economics of PayPal and trying to see what’s going on in the back end, because I was getting distracted from code and technology. I realized that we were losing a lot more money in fraud than I thought we were. It was still early 2001. If you looked at the actual loss rates, they were fairly low. You could see that we were losing money, but, given the growth of the system and the growth of the fraud, fraud was not that big of a problem. It was less than 1 percent—it was really low. But then, if you looked at the rate of growth of fraud, you could see that, if you don’t stop it, it would become 5 percent, 10 percent of the system, which would have been prohibitive.

So I started freaking out over it, and this intern and I wrote all sorts of packages— very statistical stuff—to analyze “How did it happen; how do we lose money?” By the end of the summer, we thought, “The world is going to end any minute now.” It was obvious that we were really losing tons of money. By midsummer, it was already on a $10 million range per month and just very scary.

[2] – Blake discusses how, by necessity, they closed up the source and process during the early stages of work on Firefox.

Phoenix was basically a fork of the Mozilla code base that we controlled. We closed off access to the code, because we felt it was impossible to create anything consumer-oriented when you had a thousand Netscape people in search of revenue and a thousand open source geeks who shunned big business trying to reach consensus. We just wanted to close it off and do what we thought was the right thing. We went through a couple name changes, Mozilla offered us more support, and that’s kind of how it all got started.

Thanks to Marc Chung and Joel Muzzerall for reading drafts of this. 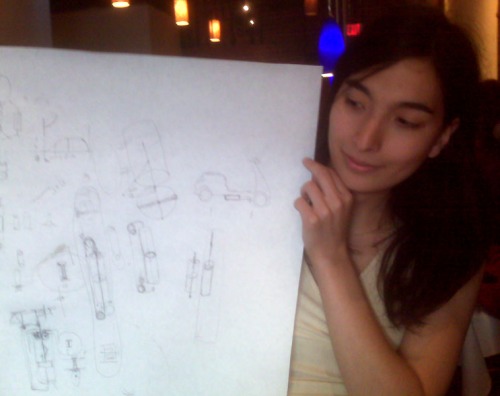 Our company is going to have graph paper placemats. Jealous? ;-)

One morning around the graduate college dining hall, there was a gathering of physicists, finance students, and economists. The physicists are always quite amazed by those people who decide to forgo the life of the ivory tower, and choose to strike out into the real world, and so could not be kept from asking what the economists actually did. Furthermore, we could not be kept from wondering aloud what type of mathematical models they built and polished, and whether any of them had a physical interpretation.

One of the economists scratched his head, drew a sip of black coffee from his porcelain cup, and mumbled something about how a large proportion of the physics department of Harvard University was hired by a trading company, with the lure of riches beyond the pale of the meager imaginings of the physicists (“you mean I can afford a house?!”).